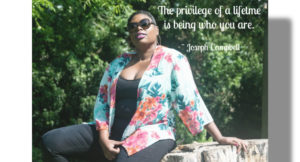 It started with a question…

If you could do anything in the world and was guaranteed success, what would you do?

I was a 25 year old woman with an extremely unfulfilling job in Recruitment. I’d been doing it for a few years and the adrenaline of hitting targets and making good money was really starting to wear off.

My company was extremely dull but I was fortunate enough to have 2 bubbly colleagues for company. We were all treading water there, biding our time until, God knows what. It was one of these women that asked me that question. My answer was that I’d be a TV presenter.

I’ve always been very self-motivated and driven but I was missing was an authentic direction of my own to follow. I was lacking a focus I was passionate about, something I could channel my natural drive into.

This was the 1st time anyone had asked me a question about my passions. I look back now and I’m shocked and sad that it took until the age of 25 for someone to ask me what I was passionate about!

But now I knew and not being one to beat about the bush, I immediately enrolled on a TV presenting course. It was so much fun, an oasis in the dry and arid landscape that was my life then. I created and started to distribute my showreel too.

Later that year my Dad was diagnosed with cancer which rocked the foundations of my family and I fell into a depression. The wheels were starting to come off my life big time. It was utterly terrifying but in hindsight it was exactly what needed to happen. I’d come as far as I could in the direction I was facing. My old life needed to be blown up so I could rebuild it on better foundations.

I was open. What I thought I knew had got me to this place in my life and that wasn’t working out too well for me! I needed to be open to things I didn’t already know. I became interested in the energetic nature of reality and started to devour self-help books.

I popped out of the other side of the depression and life was feeling better. It was far from perfect but internally it just felt more right. I took a few more trips down the rabbit hole of engaging in businesses and work I was not fully passionate about. But I was starting to get curious about who I was and what my passions were; I was learning about myself, my authentic self.

The TV presenting dream went on hold. I realised that I didn’t want to just read from an autocue but actually talk about real things. This drastic lifestyle change had also shown me that I didn’t know as much about life as I thought and I wanted to find out more. I knew that if I became a TV presenter I’d want to talk about something of substance. I didn’t know where this information was coming from but I trusted it.

Throughout this process I had been openly sharing my experiences with people. I was surprised how many people were going or had gone through something similar – why the hell weren’t they talking about it!?. When we were talking it felt like we were talking about the real shit, not just the usual shit. It was like the realest part of me was talking to the realest part of them. And as happy as they were to park it after our chat and slip back into their public mask, I couldn’t anymore. The real me was truly out of the bag now and I had no desire to put her back in.

Wowee! Coach training was one of the best things I’ve ever done in my life. Suddenly I was in a room of people that I had something in common with, that approached life in the same way and had been through a parallel version of what I’d been through. Best of all, there were these amazing leaders at the front of the room that represented where I could be one day. For the first time in my life, I liked what could be down the road for me! At last I’d found a path I was passionate about progressing on.

I was a natural too. I started coaching immediately, working with individuals, organisations, executives and running my own groups and workshops.

A couple of years later I had my son, Phoenix.  I was a Mother now and my perspective was shifting. I was finding that I didn’t just feel like Phoenix’s Mum, I felt some responsibility towards all children in our society. My social conscience switched on and I was starting to feel concerned about the lives some kids were living. I was watching The Wire around the same time and season 3 (the one about the kids) was literally a visual representation of my thoughts. And then right on cue, we had the 2011 London Riots. What. A. Night! I couldn’t believe what was happening but I also understood why.

“If the children of the village are not indoctrinated, they will burn it down just to feel the warmth.” ~African Proverb

We, me included, had been quite happily marginalising elements of society as long as they kept themselves to themselves. Now it was spilling over and affecting us all. It was like a clarion call for me, I was being called to a new adventure. Within a year started a job at a new organisation called Spark Inside that was pioneering coaching in prisons.

Personally, with Phoenix starting school I had other plans for my coaching business. These plans most definitely didn’t involve being employed. But there was that feeling again that I trusted, pulling me in another direction.

I ended up working with Spark Inside for the next 6 years. As the Programme Director I was responsible for getting their coaching programmes off the ground in prisons. During my time there I created their flagship programme The Hero’s Journey Life Coaching Programme. It’s a programme for young people aged 15-25 in prison. I also trained over 20 coaches to lead it across 8 prisons in London and the South East. To date over 600 young people and counting have been through the programme.

I also had a strong interest in systems coaching; coaching team and group dynamics. During my time at Spark we experimented with what systems coaching could contribute to the effort in making prisons a place where rehabilitation is even possible. We held 13 large group, dynamic and interactive conversations in 6 prisons between prison officers and prisoners to help them better understand each other, increase empathy and create a better living and working environment for them all.

I trained as a Organisation and Relationship Systems Coach (ORSC). I found that you can only grow as an individual so far and then there needs to be some focus on relationship, both with others and yourself.

My time as Spark was rewarding but it was also extremely challenging to work with such a toxic and dysfunctional system like the Justice System. There’s a lot of trauma in that system and it triggered unresolved trauma I had been unconsciously carrying around. Old childhood wounds came up to be healed and as I do, I dived right in. Honestly, I’m a tough old bird but this was the hardest inner work I have undertaken in my life by far. The leadership skills required for the role were immense and in the process my leadership capability was revolutionised.

The parallels of the leadership needed in all areas of society were not lost on me. As I grew and healed I was feeling increasingly jaded by that system – not a good look for me! I was wondering what was next for me. I had grown exponentially through this process and what did I want to do with all this growth, where would I love to use it? Who did I want to serve?

The same answer came up again and again – Leaders. Even the Hero’s Journey programme I’d designed for the young people in prison was a leadership programme. We needed better leadership everywhere – in families, companies, communities, schools, government. I was passionate about the new paradigm of leadership that was emerging and this is where I wanted to be of service.

Further to this, I wanted to work with women leaders and support them to lead like women and not men. It was time for us to reclaim our innate power that had been eroded by centuries of patriarchal bullshit. We couldn’t help but internalise this bullshit but now it’s time to clean it up and lead like the Queens that we are, ideally alongside Kings…..

But that’s for another day.